The other downside to 802.1X auth, it did not (originally) have support to pass back info to a switch to put a port 'tagged' into a vlan. RFC-4675 added that functionality, but Microsoft doesn't support it at all, I have been asking then for 2 yrs for it. ProVision ASIC switches from HP-ProCurve have had this for 2yrs: 3500/5400/6200/6600/8200. IEEE 802.1X is an IEEE standard for port-based network access control. It provides an authentication mechanism to devices connecting to a LAN.

This task configures the individual ports you want to operate as 802.1X authenticators for point-to-point links to 802.1X-aware clients or switches, and consists of two steps: 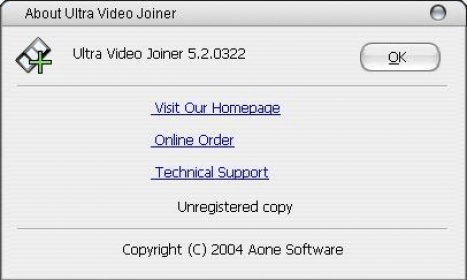 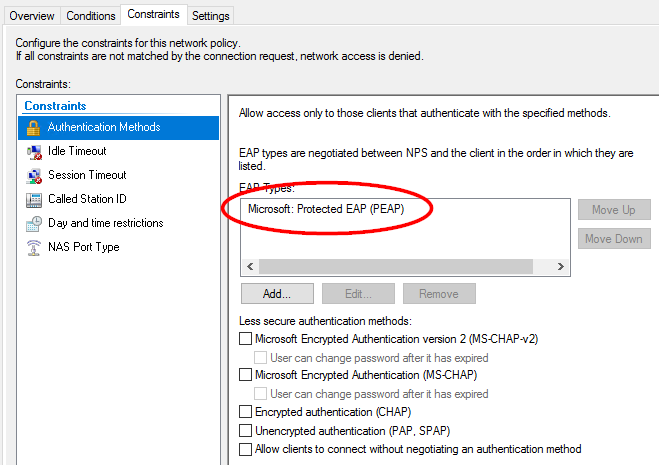 (Actual 802.1X operation does not commence until you activate 802.1X authentication on the switch.)

The commands in this section are initially set by default and can be reconfigured as needed.

Also termed “Force Authorized”. Gives access to a device connected to the port. In this case, the device does not have to provide 802.1X credentials or support 802.1X authentication. (You can still configure console, Telnet, or SSH security on the port.)

The device connected to the port must support 802.1X authentication and provide valid credentials to get network access. (Optional: You can use the Open VLAN mode to provide a path for clients without 802.1X supplicant software to down-load this software and begin the authentication process. See 802.1X Open VLAN mode.)

Also termed “Force Unauthorized”. Do not grant access to the network, regardless of whether the device provides the correct credentials and has 802.1X support. In this state, the port blocks access to any connected device.

Sets the period during which the port does not try to acquire a supplicant. The period begins after the last attempt authorized by the max-requests parameter fails. (Default: 60 seconds)

Sets the period the port waits to retransmit the next EAPOL PDU during an authentication session. (Default: 30 seconds)

Sets the period of time the switch waits for a supplicant response to an EAP request. If the supplicant does not respond within the configured time frame, the session times out. (Default: 30 seconds)

Sets the period of time after which clients connected must be re-authenticated. When the timeout is set to 0 the reauthentication is disabled (Default: 0 second)

Configures an existing static VLAN to be the Unauthorized- Client VLAN. This enables you to provide a path for clients without supplicant software to download the software and begin an authentication session. See 802.1X Open VLAN mode.

Configures the period of time the switch waits for client activity before removing an inactive client from the port. (Default: 300 seconds)

Specifies a delay in seconds for placing a port on the Unauthorized-Client VLAN. This delay allows more time for a client with 802.1X supplicant capability to initiate an authentication session. If a connected client does not initiate a session before the timer expires, the port is assigned to the Unauthenticated-Client VLAN. (Default: 0 seconds)

This task specifies how the switch authenticates the credentials provided by a supplicant connected to a switch port configured as an 802.1X authenticator.

You can configure local, chap-radius or eap-radius as the primary password authentication method for the port-access method. You also need to select none or authorized as a secondary, or backup, method.

Configures local, chap-radius or eap-radius as the primary password authentication method for port-access. The default primary authentication is local. (See the documentation for your RADIUS server application.)

To enable the switch to perform 802.1X authentication using one or more EAP-capable RADIUS servers:

If you select either eap-radius or chap-radius for the authentication method, configure the switch to use 1, 2, or 3 RADIUS servers for authentication. The following syntax shows the basic commands. For coverage of all commands related to RADIUS server configuration, see RADIUS Authentication, Authorization, and Accounting. 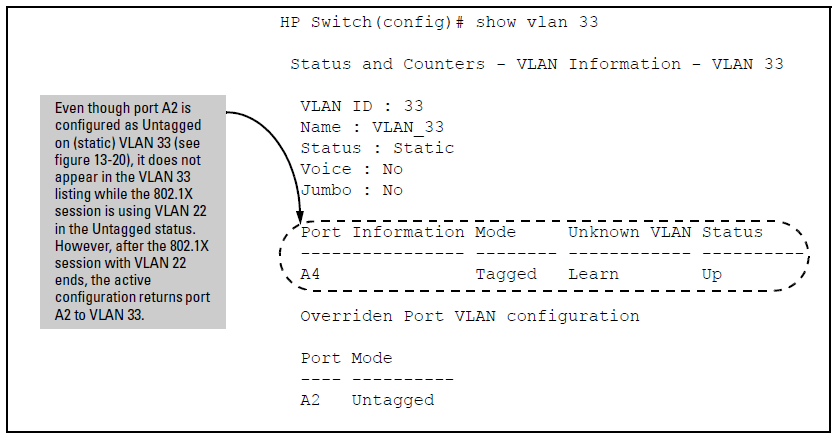 Adds a server to the RADIUS configuration.

The oobm option specifies that the RADIUS traffic will go through the out-of-band management (OOBM) port.

Optional. Specifies an encryption key for use during authentication (or accounting) sessions with the specified server. This key must match the key used on the RADIUS server. Use this option only if the specified server requires a different key than configured for the global encryption key. The tilde (~) character is allowed in the string. It is not backward compatible; the “~” character is lost if you use a software version that does not support the “~” character.

Specifies the global encryption key the switch uses for sessions with servers for which the switch does not have a server-specific key. This key is optional if all RADIUS server addresses configured in the switch include a server-specific encryption key. The tilde (~) character is allowed in the string, for example, radius-server key hp~switch. It is not backward compatible; the “~” character is lost if you use a software version that does not support the “~” character.

The no form of the command removes the global encryption key.

After configuring 802.1X authentication as described in the preceding four sections, activate it with this command:

Activates 802.1X port-access on ports you have configured as authenticators.

On the specified ports, blocks inbound and outbound traffic and restarts the 802.1X authentication process. This happens only on ports configured with control auto and actively operating as 802.1X authenticators.

On the specified ports, forces reauthentication (unless the authenticator is in “HELD” state).

After you enable 802.1X authentication on specified ports, you can use the aaa port-access controlled-direction command to configure how a port transmits traffic before it successfully authenticates a client and enters the authenticated state.

As documented in the IEEE 802.1X standard, an 802.1X-aware port that is unauthenticated can control traffic in either of the following ways:

As documented in the IEEE 802.1X standard, the disabling of incoming traffic and transmission of outgoing traffic on an 802.1X-aware egress port in an unauthenticated state (using the aaa port-access controlled-direction in command) is supported only if:

For information on how to configure the prerequisites for using the aaa port-access controlled-direction in command, see “Multiple Instance Spanning-Tree Operation” in the Advanced Traffic Management Guide.

both (default): Incoming and outgoing traffic is blocked on an 802.1X-aware port before authentication occurs.

The Wake-on-LAN feature is used by network administrators to remotely power on a sleeping workstation (for example, during early morning hours to perform routine maintenance operations, such as patch management and software updates).

Configuring 802.1X controlled directions shows how to enable the transmission of Wake-on-LAN traffic in the egress direction on an 802.1X-aware port before it transitions to the 802.1X authenticated state and successfully authenticates a client device.

Enables or disables guests on ports with authenticated clients.