Following blink-182's hiatus and reunion, the band's sixth studio album, Neighborhoods, had been a fitting symbol for their creative coordination but was somewhat lacking in any tangible sense of their reborn unity. This they attributed to having recorded their contributions separately from each other and vowed to take a different approach for their next album, slated for a 2014 release.

Eager to get cracking on some new material, however – especially in light of their recent emancipation from Interscope/DGC Records, as well as Barker's full recovery – the band were back in the studio by November 2012, and by December had released this self-produced, five-track EP.

Dogs Eating Dogs (sharing its name with the second track, so essentially an 'untitled') has no definable theme or narrative; its purpose was to serve as a laboratory or workshop for the band's once limited creative freedom. At this point in their career, the EP can also be viewed as a kind of demo tape for their future, showcasing the band's new direction.

Musically, it draws on the artistic leanings of each individual band member, with echoes of +44 and Angels & Airwaves almost in alternation, and the palpable influences of other artists and genres turning out some refreshingly new sounds.

When I Was Young

The first track, for instance, 'When I Was Young', opens unrecognisably for blink with a forty-second pipe organ intro set to an expansive and industrial drumbeat. Whilst reminiscent of the extended instrumentals of Angels & Airwaves, the actual sound is more indie rock than space rock and was compared by Spin reviewer Kyle McGovern to Arcade Fire. Eventually, the track kicks into familiar gear with an upbeat tempo and DeLonge's unmistakable vocals, offset in the chorus by Hoppus.

'Dogs Eating Dogs' is a comparatively rowdy and vastly more aggressive track than the first, exploring alienation and paranoia with some solid percussion from Barker. Where the first track showed signs of DeLonge's influence, this Hoppus-led song feels more like a +44 release: straightforward pop-punk with an indie twist.

The final track on the album, 'Pretty Little Girl', was written by Tom DeLonge for his wife and set mature lyrics to a new wave vibe. It also features vocals from the rapper Yelawolf (no doubt at the suggestion of Travis, with whom he had just released the EP Psycho White) which, although not entirely necessary, nevertheless symbolically draw Travis Barker's love of hip-hop into the EP's broad mix of influences.

Critics were generally excited by the EP, calling it indicative of the band's bright future, unfettered by the concern of sounding 'right' (or worse, marketable), and thus free to experiment as they wished.
More than just a stopgap before their next full album, Dogs Eating Dogs is a testament to the band's new-found vitality, as well as the inner strength drawn from their reconciled musical diversity. 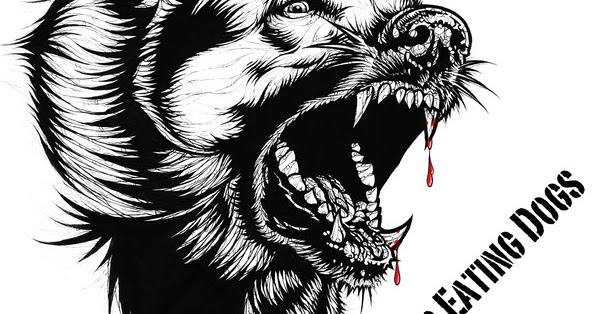