It has been my experience that family-friendly games do not get the attention they deserve. As much of the video game world is looked on from the outside as a world relating to children, from the inside it's just the opposite. The gaming world often views itself as an adult playground, where children's games are often the subject of much sneering within the gaming community. Family-oriented games are largely ignored by the game review sites, and it's a real travesty because they miss out on really great titles intended for the younger sect such as Cars Mater-National.

Based on the Disney-Pixar hit film Cars, the game goes beyond the story from the movie and sees Lightning McQueen returning to Radiator Springs for the Mater-National, an international race that is to be hosted in the once trodden-down town. And, as the name suggests, the race is founded and hosted by the rusty old tow truck himself, the irreplaceable Mater. You play through most of the game as racecar hotshot Lighting, but just like everyone else, you have to qualify for the Mater-National. The qualifying system basically works with a three tiered system based on flags. You earn flags by participating in small races and mini-games. Earn enough flags, and you can participate in regional races, win the regional race, and you are able to unlock a new location and a round of the Mater-National. It's a very tight system, and actually involves quite a bit of depth. Each stage you unlock brings new challenges, mini-games, personalities, and experiences, so you never know what you'll find as you continue on your quest for glory. The game uses an open world system (much like that of the Test Drive series), and you find different races and events to participate in that are unique to each stage. And each event gets you that much closer to Mater-National glory. But just because you've unlocked all the locations and won the Mater-National, don't think it's over there. If you want to truly beat the game, you have to go back, and beat all the little local races and mini-games to earn all 350 flags.

The game itself is not all that hard, and you can beat the game in its entirety in about six hours. But that's not really the point. The game itself is great fun, especially for kids who would like to explore the automotive genre, and aren't quite ready for the Forza series. Another strength of this game lies in how many different ways you can race. There are relay racing modes, tag racing modes, there's even a fuel-saving racing mode. So if you know a young one who is itching to play a racing game, then this title right here fits the bill perfectly. 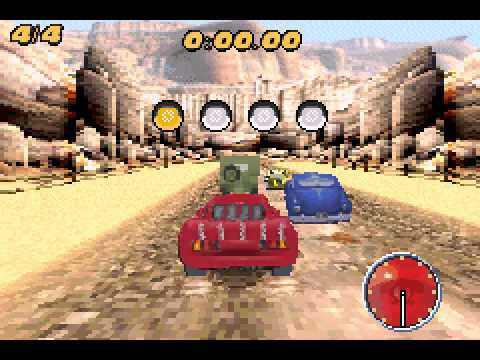 In addition to the story mode, there's also an arcade mode that lets you pick your favorite Cars characters and race against either the CPU or your friends. This mode is fairly simplistic, but it definitely allows for ample opportunity to play with family and friends. Not to mention it's the only real opportunity in the game to play as characters other then Lighting or Mater. Among the playable characters available include movie favorites such as Flo, Ramone, and the Doc. Each character feature specific characteristics and paint jobs to customize.

Graphics-wise, this game is pretty well set. The look of it resembles the CG of the movie and is very well done. The characters all look like they did in the movie, and feature very smooth detailing and effects. Environments, however, are the ones that really shine in this game. The various landscapes, mostly feature a Midwestern feel come vibrantly to life in vast color and detail. Some of the tracks in this game are among the best I've ever seen, as far as their overall look.

Cars Mater-National Championship is a Racing video game published by THQ released on November 12th, 2007 for the GameBoy Advance.

Crack internet download manager 6.32 build 8. Idm 6.32 Build 11 Serial Key IDM Crack 6.33 Build 3 is the commonly used software for download files at fast speed. It provides you with the best speed for download. IDM 6.32 Patch is a versatile task management tool that helps you to download many types of files from the Internet and organize them as you see fit. You can categorize each file as you download it, and then access all downloads right from the app’s main interface. Internet Download Manager IDM Crack 6.32 Build 7 With Patch Free Download is a fastest and oldest internet download manager crack designed to increase your download speed up to 50 percent other than downloaders, IDM crack have the ability to resume due to network connection lost, network failure, computer shutdown or any issues that caused to disconnect your internet. With the newest version. All popular browsers and applications are supported! Internet Download Manager has been tested. Crack www.mediafire.com/file/1kohx73ejzggd77/ID.M-6.32.Build+11+by+m.rar & www.sendspace.com/file/doild.