I realize that what I’m writing here is aimed at a somewhat limited audience. But for those of us who have spent years trying to get our electric guitars to talk to our software synthesizers, Denmark’s Jam Origin software company has made quite a breakthrough.

I’ll get to that in a moment, but first…

(Skip down to the next subhead if all of this is old hat to you.)

In 1977, the Roland corporation of Japan, which has long been at the forefront of integrating music and technology introduced the GR-500, first commercially available guitar synthesizer. While the body of the GR-500 was shaped much like Gibson’s best-selling Les Paul electric guitar, the GR-500 was a far more complex beast, with seven dials on the guitar for various sounds, along with eight toggle switches. The guitar also featured the first iteration of Roland’s breakthrough hexophonic pickup, which unlike the mono electric guitar pickups of the 1950s designed by men such as Leo Fender and Gibson’s Seth Lover, fed the output from each string to separate outputs of a multipin-equipped cable, allowing for polyphonic synthesizer control. The Roland GR-500 in turn was plugged into a module that resembled Data’s control station on the bridge of Star Trek: The Next Generation. Roland would later refine and simplify this approach into the GR-300, used in the early ’80s by such notable electric guitarists as Andy Summers of the Police, Robert Fripp and Adrian Belew of King Crimson, Jimmy Page, and Pat Matheny.

The GR-300 was an interesting beast with its own distinct fuzzy analog synth sound; it tracked remarkably well, but these early guitar synthesizers were all self-contained; they couldn’t control other sound modules or keyboards. But while the guitar synthesizer was first taking off, Roland, along with Oberheim Electronics, Sequential Circuits, Korg, Yamaha, and Kwaii introduced the concept of MIDI, short for Musical Instrument Digital Interface, in 1983 to allow synthesizers, drum machines, and other forms of music technology to talk with each other. Finally, a keyboard produced Yamaha could control a sound module or drum machine produced by Roland, since they now shared a mutual language.

In the mid-1980s, Roland released a rack-mounted MIDI converter for their early multipin-equipped guitars called the GM-70.

Perhaps due to the tracking issues, in the following decade, Roland seemed to move somewhat away from the guitar synthesizer model, instead creating their virtual guitar system, which also used their proprietary hexaphonic pickup, releasing the VG-8 in 1995, the VG-88 in 2000, and the VG-99 in 2007. Because these units were largely modeling guitar-oriented sounds, they track extremely well and are surprisingly user friendly; I still use my VG-88 and VG-99 to this day.

But starting in the late 1990s, as computers became more and more powerful, software-based synthesizers became more and more popular; instead of banks and banks of physical synthesizers overwhelming a music room, a single computer could contain within it programs such as Reason, and the software versions of Korg’s popular M1 and Wavestation, the Fairlight, the Synclavier, and other classic and cutting edge synthesizer sounds. And they could be seamlessly integrated with digital audio workstation (DAW) recording programs. 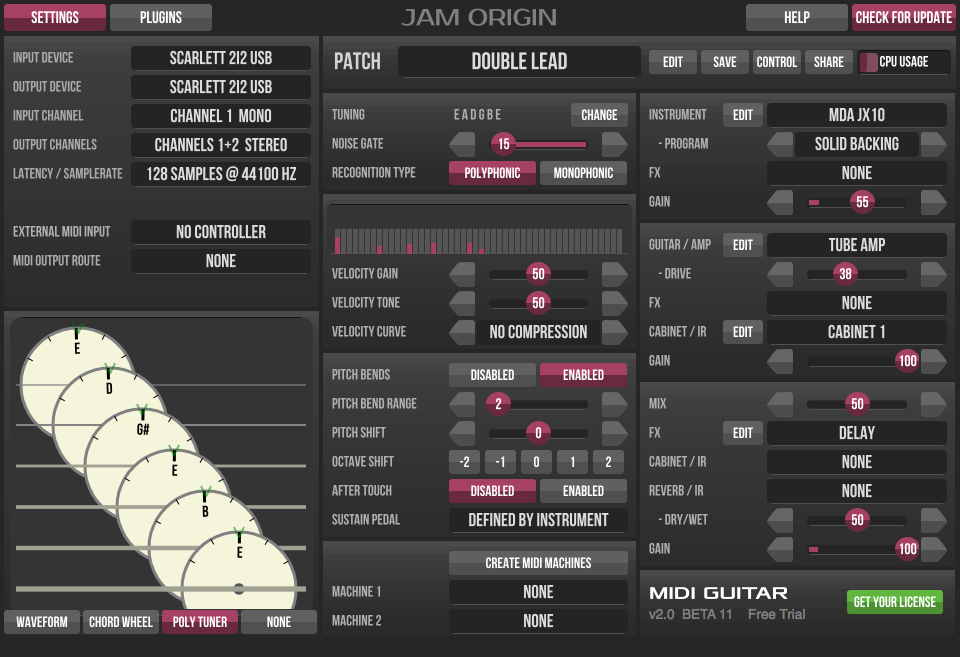 However, controlling these synthesizers via guitar was a challenge.

In 2003, Roland introduced the GI-20 interface, which allowed a guitar with a compatible hex pickup to connect his guitar to a computer’s USB port. However, the tracking on the GI-20 was far from perfect, leading to many frustrated guitarists. Personally, as someone who is a far better guitarist than keyboardist, I loved the ability to play my software synthesizers via guitar, despite having to spend plenty of time afterwards editing a part of glitches and ghost notes – it’s quite a challenge for any device to translate the idiosyncratic playing techniques of guitar with its slides, finger squeaks and bent notes to a format that’s compatible with keyboard-oriented synthesizers. But in order to add keyboards, pads and exotic instruments to my guitar-oriented productions, I soldiered on with the GI-20 ever since purchasing a unit shortly after its release to write reviews for the early days of Blogcritics and the consumer electronics magazine Nuts & Volts.

That is, until early November. When casually watching a video at England’s Sound on Sound on the magazine’s 30th anniversary late one night, I nearly fell out of my chair, when about 19 minutes in, Paul White, the magazine’s editor, who is also a guitarist, said he was experimenting with a VST-plugin MIDI guitar interface. I really was astonished; I guess I assumed that guitarists were such outliers to the world of software synthesizers that nobody was working on a software based guitar to MIDI interface. Or that if something existed, it would be monophonic, as in Sonus’ guitar-to-MIDI interfaces. You had to bolt on a specially-made hexaphonic pickup for any sort of polyphonic midi guitar.

Man, was I wrong.

Jam Origin’s MIDI Guitar 2, while still in Beta, is a remarkable product. It reminds me very much of Celemony’s Melodyne pitch correction plugin, in that there’s obviously incredible amounts of processing going on under the hood, and as good as it the plugin is now, it will only get better. (And like Melodyne, I suspect Jam Origin will be licensing this technology to a number of music software manufacturers, making its future integration into DAWs even more seamless.) Finally, someone invented a polyphonic MIDI interface that works with any electric guitar — no proprietary hex pickup and 13-pin cable needed — and that translates notes on the guitar into polyphonic MIDI data.

Obviously, you’ll need an audio interface that’s recording friendly for this plugin to work. If you’ve already been recording multitrack audio with your PC, you should be fine – my Fireface UCX played extremely nicely with MIDI Guitar 2; in fact, the latency setting Jam Origin recommends for best results is 128 milliseconds; the Fireface goes all the way down to 48.

Once I configured the MIDI Guitar plugin, I immediately noticed a large improvement in the tracking over my old Roland GI-20. Suddenly, software synthesizer plugins that were nearly unusable with the GI-20 were open to me. Playing with the lead patches in my Korg M1 software synth that were based on the early Minimoog sounds of Jan Hammer and Keith Emerson, I had loads of fun ripping up and down the fretboard.

As its name suggests, Jam Origin’s MIDI Guitar is in revision two, and that iteration has undergone its tenth update. But as Jam Origin concedes, the note bending function isn’t quite there yet; engaging that feature adds additional glitches, and it doesn’t yet feel as transparent as say, someone bending notes on his Stratocaster. And there are still occasional glitches; translating the mechanics of guitar playing into a format a keyboard-oriented synthesizer recognizes is quite a challenge for any interface. But I found myself doing a lot less deglitching and sliding notes around after recording with the Jam Origin 2 than the GI-20. (Part of this is also my own quest for creating as perfect a part as possible, and to compensate for the limitations of my own playing. And part is also habit from years of working with the Roland GI-20.)

While most computer-based musicians will use Jam Origin in conjunction with their DAWs, it also has a handy standalone function, for practicing and noodling around between recording. However, in this mode, it wasn’t compatible with all of my software synths. For example, starting around 2005 or so, I became heavily addicted to Korg’s software recreations of iconic M1 and Wavestation synthesizers from the late ‘80s and early ‘90s. But at the moment, the standalone version of MIDI Guitar 2 doesn’t appear to talk to them. However, inside Cakewalk’s Sonar X3 DAW, they all play happily together. Similarly, as Jam Origin notes in its setup instructions, using Midi Guitar 2 in Propellerhead’s popular Reason soft synth can be a challenge to setup. Once again though, using Reason in its Rewire mode inside Sonar X3, Midi Guitar worked perfectly well.

What's wrong with celine dion. But then Jam Origin is still listing MIDI Guitar 2 as a beta product; its cost of $99.95 is quite reasonable and includes updates as they are released — and doesn’t require the additional cost and hassle of an aftermarket hex pickup on your favorite guitar. It’s not perfect – yet. But still, for the electronic music hobbyist, home recordist, or studio pro who wants to play software synthesizers via his guitar, finally, there’s a light at the end of the tunnel.