Example: Kick - Parappa: Kick kick kick kick kick kick! Try to do it to the beat though. Chop Chop Master Onion will kick away the Dojo's walls and watch you at the sunset. To maintain it, push all the buttons at random, including L and R Getting cool with Mooselini in Parappa is similar to stage 1. 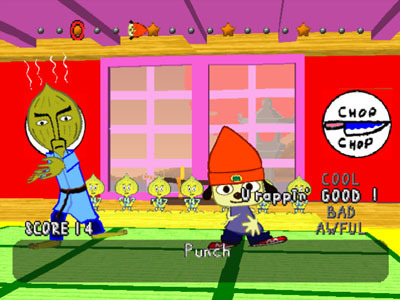 Parappa is my homeboy (homedog?). I won't clutter this review with tales of videotaping my game sessions, buying Japanese soundtracks and the like; suffice it to say I'm down with Parappa. Thus, you can label me one of those extremely pumped to hear of his PSP resurgence -- joining another music-game pioneer in Gitaroo Man. While it's great to play through the game again and be able to do it on the go, this isn't quite the re-release I was looking for.
For those poor uninitiated, Parappa the Rapper was essentially the first rhythm/music game to hit the masses. You portray a cute, flat cartoon dog trying to garner the affections of a cute gal. Obstacles pop up, but through lyrical prowess and a can-do spirit, Parappa perseveres. He learns to drive, pawns goods, and even battles for bathroom privileges. It's a brilliantly adorable tale with plenty of subtle nuances and quirky characters. The art style is still unique to this day, and the music will go down as one of the best original scores in the history of gaming.
The gameplay of Parappa has now become a video-game staple: It's button-pressing Simon-says. First your 'teacher' spits a line, then you repeat back by tapping the corresponding buttons in time. A meter tracks your progress, though scoring can be arbitrary at times. There's a little wiggle room for freestyling, but you'd better know your stuff.
If there was a knock on Parappa, it's how short the game is. With a mere six stages, a skilled player can get through the whole shebang in about 40 minutes. Replay comes from a simple desire to hear the kick-ass songs again, or wanting to either do better or worse to see how it affects the game. For example, during Cheap Cheap the Cooking Chicken's stage, she's rapping at you from a television. If you start to falter, she'll flap out of the TV and accost you face to beak. Getting a 'Cool' rating is the game's holy grail, and won't be easy to attain.
The script hasn't flipped much on PlayStation Portable. The widescreen presentation feels natural, and the graphics look a tad sharper -- with crisper lines and such. A few seconds of loading before a chapter's cutscene will carry you through the song and ending cutscene, which is more than reasonable. However, the button icons are a little too small.