2017: Aug 21 solar eclipse to Sept 23 great Sign is 33 days Since the sun’s core is known to blast out continuous streams of particles called neutrinos, some scientists are attempting to find evidence that neutrinos are the culprits behind the mutation of matter.

'And there appeared a great wonder in heaven; a woman clothed with the sun, and the moon under her feet, and upon her head a crown of twelve stars: And she being with child cried, travailing in birth, and pained to be delivered. And there appeared another wonder in heaven; and behold a great red dragon, having seven heads and ten horns, and seven crowns upon his heads. And his tail drew the third part of the stars of heaven, and did cast them to the earth: and the dragon stood before the woman which was ready to be delivered, for to devour her child as soon as it was born. And she brought forth a man child, who was to rule all nations with a rod of iron: and her child was caught up unto God, and to his throne!' Revelation 12:1-5

It's important to make a clear distinction between biblical astronomy, (which is referenced in scripture many times), and secular astrology which has been corrupted and perverted by satan. To somehow conclude that satan would manipulate the heavens and its celestial bodies to deceive humanity is an outrageous claim as we know that there is only one divine creator who is our heavenly father, Yahweh God Almighty. In fact the 12 main star clusters better known as the constellations were initially used by the Hebrews and were a God given heavenly 'clock' of sorts called the Mazzaroth that all points to Jesus Christ. For example Virgo (the virgin) point to the Virgin Mary and the birth of Christ. Then Leo (or the lion) refers to the Lion of The Tribe of Judah, Jesus Christ. All these magnificent signs were deliberately and accurately placed in the heavens by God for specific signs as a form of communication from our creator to all of humanity. This can be found in:

Job 38:31-32 'Canst thou bind the sweet influences of Pleiades (a star cluster), or loose the bands of Orion (one of the constellations)? Canst thou bring forth Mazzaroth (the 12 constellations) in his season? or canst thou guide Arcturus with his sons (little and big dipper)?'

Key verses that speak of astronomical signs in the heavens:

genesis 1:14 'And God said, Let there be lights in the firmament of the heaven to divide the day from the night; and let them be for signs, and for seasons, and for days, and years'

Luke 21:25 'And there shall be signs in the sun, and in the moon, and in the stars; and upon the earth distress of nations, with perplexity; the sea and the waves roaring;'

NOTABLE BIBLICAL EVENTS THAT ALSO TOOK PLACE ON TISHRI 1ST ON THE HEBREW CALENDAR WHICH IS SEPTEMBER 23RD. GOD'S TIMING IS PERFECT!

September 23, 2017 is the date of the precise alignment detailed in Revelation 12 by John The Revelator, which occurs for the first and only time in human history. This takes place immediately following the Feast of Trumpets and the Jewish New Year,Tishri 1. The Jewish people are known for their near perfect record keeping. There were some extraordinary events that took place on Tishri 1 throughout Jewish history. The Jewish calender does not fall on the same days as the Gregorian calender as each month is 30 days.

Searching historical records for specific dates in Jewish history and you will discover there are two days that had a remarkable number of significant occurrences, Tishri 1 and Nisan 15. While every other day in Jewish history had between 3-15 notable events these two were upwards of 50. Here are just a few events that have taken place on Tishri 1, Rosh Hashanah (New Moon and Feast of Trumpets)

° Adam and Eve are created 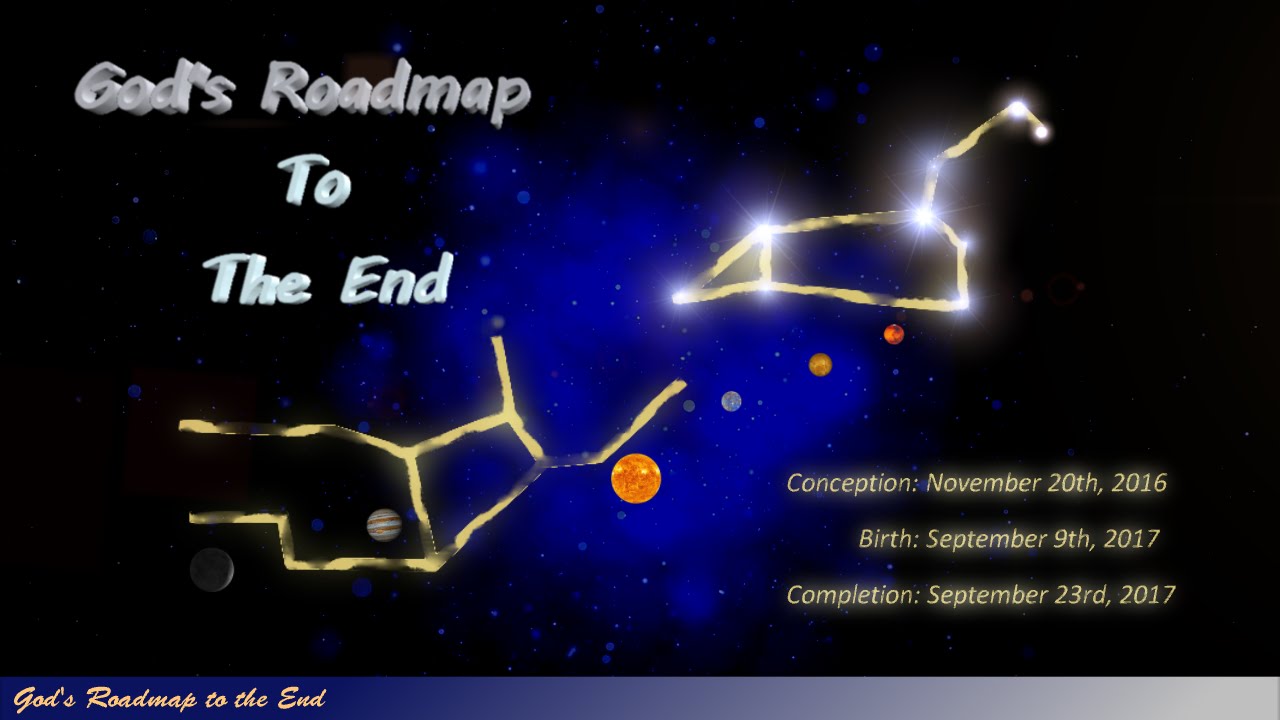 ° David is forgiven for Bathsheba sin

'She gave birth to a male child, (the BODY OF CHRIST) one who is to rule all the nations with a rod of iron, but her child was caught up to God and to his throne, and the woman fled into the wilderness, where she has a place prepared by God, in which she is to be nourished for 1,260 days.' Interesting Fact: It is exactly 1,260 days from the first Lunar Eclipse Tetrad of April 15, 2015 (which was on PASSOVER 2015) Also note: All Blood Moons of this tetrad fell on high Jewish Feast days (PASSOVER and SUKKOT respectively.)

If we suffer, we shall also reign with himMatthew 19:28 Jesus said to them, 'Truly I tell you, in the renewal of all things, when the Son of Man sits on His glorious throne, you who have followed Me will also sit on twelve thrones, judging the twelve tribes of Israel.Luke 12:And I bestow on you a kingdom, just as My Father has bestowed on Me,Luke 22:30so that you may eat and drink at My table in My kingdom, and sit on thrones, judging the twelve tribes of Israel.Romans 5And if we are children, then we are heirs: heirs of God and co-heirs with Christ--if indeed we suffer with Him, so that we may also be glorified with Him.[Revelation 20:6 and Cross References prove co-heirs/co-reign.]

Also worthy of consideration in relation to the Revelation 12 sign is the total solar eclipse of August 21st, 2017 that will occur exaclt 33 days prior to the September 23rd astronomical alignment. It's path of totality will fall on the US alone and no other country. It will cross from coast to coast for the first time ever to be witnessed since this nation was established. It will cross diagonally from the west in Oregon to the east exiting in South Carolina. More on this event in the video below:

Pastor Mark Biltz goes into more detail about the historical & biblical significance of the upcoming August 21st eclipse. He covers WW1 and past eclipses seen in Europe and North America and the events that occurred around them. You need to hear this. For more info on Pastor Mark Biltz and his ministry go to El Shaddai Ministries.us

What WILL HAPPEN on September 23, 2017, the church cannot ignore this! Here's a great explanation of The Revelation 12 Great Sign in the Heavens by Scottie Clarke of ERFministries.com

The Son born by the woman is the ChurchThe 12 stars representing the crown on her head is rare unto itself as there are 3 additional planets uniting with the 9 star of Leo to give her 12. 12 stars could very well be symbolic of the 12 tribes or 12 apostles. Clothed with the sun, indicative of the Holy Spirit, the beloved bride of Christ is made righteous through His redemptive work on the cross. The moon at her feet as though being trampled represents ancient Moon-god worship and darkness. The woman has prophetically often meant the Israel and this shining glory indwelt by the Holy Spirit is travailing in birth as it is passing the King Planet (Jupiter) through her womb. She then proceeds to go where “she has a place prepared by God to be nourished for 1,260 days.”1260 days mirrors exactly with Daniels prophecy of a time, times and half a time. In other words, 1 year + 2 years + half a year. This means that for 3.5 years the woman is nourished in a place prepared by God. When the Bible references specific time frames that parallel with others it is for a reason. Remember a day with Lord is like a thousand years and a thousand years is like a day. You can draw your own conclusions about whether the Bride of Christ is travailing in birth, giving birth to the King Planet, the day after the Feast in which no man knows the day or hour, when the Bridegroom would go prepare place to come at a time only known by His Father, during an event in the heavens that has never before taken place that is specifically detailed in Revelation. Am I date setting? Do I know the day or the hour? If I said Jesus would return on any of 3 days in September of 2017, would that be anti-biblical? The church has become calloused at looking at those things which defy coincidence because of past indiscretions. While I cannot say with certainty, I can say that from a biblical standpoint there is precedence for believing in a time frame. Our Savior encourages us to be on the lookout for our Blessed Hope.Now war arose in heaven, Michael and his angels fighting against the dragon. And the dragon and his angels fought back, but he was defeated, and there was no longer any place for them in heaven. And the great dragon was thrown down, that ancient serpent, who is called the devil and Satan, the deceiver of the whole world—he was thrown down to the earth, and his angels were thrown down with him. And I heard a loud voice in heaven, saying, “Now the salvation and the power and the kingdom of our God and the authority of his Christ have come, for the accuser of our brothers has been thrown down, who accuses them day and night before our God. And they have conquered him by the blood of the Lamb and by the word of their testimony, for they loved not their lives even unto death. Therefore, rejoice, O heavens and you who dwell in them! But woe to you, O earth and sea, for the devil has come down to you in great wrath, because he knows that his time is short!”And when the dragon saw that he had been thrown down to the earth, he pursued the woman who had given birth to the male child. But the woman was given the two wings of the great eagle so that she might fly from the serpent into the wilderness, to the place where she is to be nourished for a time, and times, and half a time. The serpent poured water like a river out of his mouth after the woman, to sweep her away with a flood. But the earth came to the help of the woman, and the earth opened its mouth and swallowed the river that the dragon had poured from his mouth. Then the dragon became furious with the woman and went off to make war on the rest of her offspring, on those who keep the commandments of God and hold to the testimony of Jesus. And he stood on the sand of the sea.During the time Virgo is giving birth to the King Planet the constellations Serpent is waiting right below her legs. The head of a serpent waiting to devour the child that is to be born. Over the next two months Mercury encounters Saturn and goes into retrograde motion and it appears in real time that the two planets are colliding with one another. Now for the sake of argument I want you to assume that Mercury represents Michael the archangel and Saturn represents Satan. This is not just random symbolism as there is precedence for this allegorical application and I encourage you to do your own research. After Mercury and Saturn appear to be encircling each other as if engaged in battle, Mercury leaves and engages Saturn a second time. After the double conjunction between Mercury and Saturn, Saturn drops down into the head of Sagittarius which depicts the Antichrist. If you accept what takes place in the heavens immediately following the sign of Virgo you also have Satan being cast out of heaven by Michael and then indwelling the Antichrist.